Censorship is obviously nothing new. YouTube, which might win First Prize in today’s Censorship Sweepstakes, has banned thousands of channels for no other reason than challenging the official narrative on various topics—especially COVID.  My interview with Spiro Skouras was deleted by YouTube in less time than the podcast itself lasted, and it had to be transferred to Bitchute. An interview I did some time ago with Eric Gajweksi of TradCatKnight—before he moved his podcast from YouTube to private—received 226,000 views after 5 days. Then YouTube simply stopped counting. After a month, the interview still listed “226,000 views.” Other hosts have told me their YouTube views actually went down—a physical impossibility.

Subscriber numbers have also been monkeyed with—as can be confirmed by Sean of SGT Report, who “officially” had over 600,000 subscribers before YouTube yanked him.  Demonetization of videos (removing ads) is yet another way of squeezing the “politically incorrect.” Censorship comes in many forms.

My own paperback on COVID was banished by Amazon, after selling more than 3,500 copies in less than two months, even though every statement it made was supported by end-notes to scholarly and/or mainstream sources, and despite Amazon’s lack of qualified medical professionals on its staff, plus its inability to name, upon request, a single misstatement that the book had made.

There is, however, a more subtle form of censorship than outright deletion: “shadow banning.”

I joined Twitter in 2014, and, as a result of a stream of Tweets and memes, saw a steady increase of followers from zero to 22.3 thousand in 2020.  Theoretically, anyone who follows you is supposed to automatically receive your Tweets in their own Twitter feed. (Of course, not everyone will actually have time to see all the Tweets of accounts they subscribe to, especially if they follow a large number of people.) However, I began to notice strange happenings.

In 2020, I was gaining an average of about 30 followers a day, meaning I should have added about 10,000 more in the past year. Instead, my new followers have increased from 22.3K to just 22.5K followers over the past year, a total of about 200, or an average less than one per day. Part of this—but certainly not all—was attributable to systemic purges of other Twitter accounts, which sometimes saw hundreds of my followers vanished overnight.

But there was more to it than this. What I post on Twitter mostly consists either of memes (samples here) or links to posts and news articles. But something odd occurred. I was getting significantly fewer “retweets” and “likes” with 22,000 followers than I used to with 7,000 or so followers. There was a time when a Tweet of mine could get a thousand retweets, but now I was lucky to get 20.

Added suspicion grew when some of my followers wrote to me and asked why I wasn’t Tweeting any longer. I replied: “I haven’t stopped Tweeting at all; I Tweet every day; visit my feed at https://twitter.com/jamesperloff.”

The banning was reciprocal, by the way. My Twitter feed (Tweets I see from other people) was also shrinking. It was taking less and less time to scroll to where I had finished viewing the day before.

One day I realized I hadn’t seen a Tweet from my old friend Henry Makow in weeks. When I visited his page, not only did I discover that Henry had been Tweeting regularly, but someone had removed me as one of his followers  (And it was certainly not Henry; he had not “blocked” me). So I hit the “follow” button again.  By the way, Henry, with over 30,000 followers, was eventually removed altogether by Twitter, though he is now back as Henry M @TheNewHenryM.

About a month ago, I grew more skeptical when I posted a meme that received perhaps a dozen retweets. Two days later, someone else posted the exact same meme, and it got about 60 RTs (retweets). I assumed the person had a larger following, but on checking their profile, I saw they had about 1,000 followers, about 5 percent of mine.

So I decided to perform a test. I posted a meme. After about an hour or so, it had 3 RTs and 6 “likes.” I then asked a friend on Twitter, who has a comparable following (but is clearly not shadow-banned) to retweet it.

Within another hour or so, it jumped to over 70 RTs, and subsequently climbed to the stats you see in the screenshot below—over 100 RTs and over 300 likes. 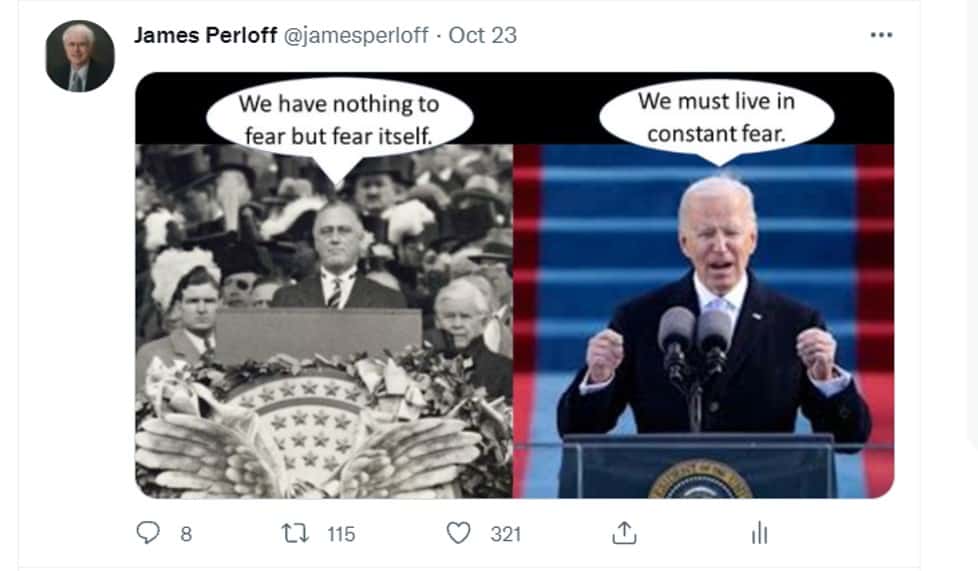 These were numbers I had not seen in months, but used to see rather typically.

So I now had confirmation of what I had suspected was going on: shadow banning. Only a small handful of my 22,000 followers were actually being permitted to view my Tweets.

Things could be worse, of course—one can be banned from Twitter altogether. I have already been in Twitter Jail twice—once for simply linking to a story in the mainstream news media about a healthy 28-year-old who died after getting a COVID shot.

However, shadow banning may be more destructive in its own subtle way. It makes you labor under the illusion that you are reaching a large number of people, when in fact you aren’t. Some individuals have sent me news, information, announcements about protest marches, etc., commenting to this effect: “You have wide influence; could you please share this?” I have obliged them, but unfortunately the outreach was far more limited than hoped for.

I have been advised, of course, to try switching platforms. I have never joined FaceBook (which has the largest subscriber base in social media) because of its Draconian censorship (last year FB began blocking every single post on my old website as “abusive,” prohibited any mention of jamesperloff.com on FaceBook Messenger, and reset the history of all my posts previously shared on FB from (in cases, several thousand) to zero. I have joined Gab (https://gab.com/JamesPerloff)—touted to be censorship-free—but have yet to post there. I know there are many other media platforms, but it is time-consuming to simultaneously post in multiple places, and on some of these platforms, censorship still waits in the wings.

In the meantime, most people who follow me on Twitter must unfortunately check my feed (https://twitter.com/jamesperloff) on a regular manual basis–unless I get booted off permanently.

Amazon Censors “COVID-19 and the Agendas to Come, Red-Pilled”

The War on “Truth Is a Lonely Warrior”

THE WILD GEESE (1978) was action film only on surface. Based on book by white South African, it’s about attempt to save African leader based on Moise Tshombe (Christian leader of Katanga) & features a treacherous banker much like a Rothschild. VERY non-pc. https://www.youtube.com/watch?v=sqz2WvoCM20

Sent by a friend.

The mental illness is strong with this one