Are the Rothschild Elite Banking on the Weather?

Weather modification is widely discussed in alternative media. Even mainstream media acknowledge that we’ve been seeding clouds to make it rain since the end of World War II, and that during the Vietnam War, the U.S. military seeded clouds to extend the monsoon season. In his 1970 book Between Two Ages, Zbigniew Brzezinski quoted geophysicist Gordon J. F. MacDonald on the use of weaponized weather:

Techniques of weather modification could be employed to produce prolonged periods of drought or storms, thereby weakening a nation’s capacity and forcing it to accept the demands of the competitor.1

Such possibilities were aggressively advanced in the Air Force’s 1996 research paper Weather as a Force Multiplier: Owning the Weather in 2025.

It is generally understood that weather control today represents a component of the population control program of the Illuminati, other elements including GMOs, chemtrails, vaccines, abortion, and of course the old stand-by of war. The Zionist PTB know that if they level a town with a bomb, people will ask “Who dropped the bomb?” But if they level it with a HAARP-energized, directed tornado, people will call it “Mother Nature” or “an act of God.” 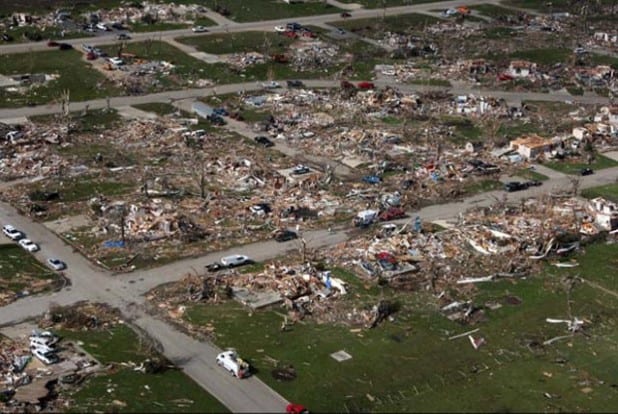 It is not the purpose of this post to elaborate on the population-reduction facet of weather control, or the technologies involved, which are discussed abundantly at sites such as Geoengineering Watch. Rather, I wish to address other motives associated with it that garner less attention.

Saving for a Rainy Day

I have found that major Illuminati operations are usually undertaken for multi-dimensional reasons. Profit is often not the foremost motive, but what bankster will pass up an opportunity to cash in? World War I, for example, achieved numerous geopolitical objectives, including the restructuring of Europe, the League of Nations, the Bolshevik Revolution, the Balfour Declaration, and the liberty-reducing Espionage and Sedition Acts here in the U.S. But not to be forgotten: the war profiteering which looted billions of dollars from American taxpayers for war goods never manufactured or delivered. (I discuss all this in some detail at the close of my post False Flag at Sea.) Likewise, 9/11 produced the Middle East wars being fought to establish Greater Israel, and the justification for Homeland Security and the Patriot Act, but who can overlook the billions in war profits, or the pre-9/11 shorting of airline stocks by parties still unidentified?

Weather control also offers attractive financial perks. Futures are a highly risky Wall Street investment, which can make or lose fortunes in a flash (just ask Hillary Clinton, who made $100,000 on a $1,000 initial futures investment in the late 1970s). It was my author friend Rachael McIntosh who first called my attention to the strange investment called “weather derivatives.” Not being a finance guy myself, I’ll let Bloomberg define these in this short clip:

However, Bloomberg’s elucidation is missing the keystone of this investment scene: weather control. For if, as some, say, every market is rigged, why should weather futures be an exception? The elite don’t bet on a horse race unless it’s fixed. Geoengineering gives those at the top the ability to see the future they control; they can know, with high probability, when and where disastrous weather will strike.

In fact, weather control has implications for other traded commodities as well. If one knows in advance that heatwaves will strike the Midwest, one could invest in corn futures accordingly; likewise, if one knows that a hurricane will devastate Florida, it will impact orange juice futures.

Speaking of Florida hurricanes, Rachael McIntosh relates a significant story regarding the 2012 GOP Convention in Tampa (she describes her experiences there as a Ron Paul delegate in her novel The Big Show, and I touch on them in my recent post on elections).

At the convention, Ron Paul was slated to speak on the first night (Monday, August 27). However, the convention was cancelled that evening due to the alleged threat of “Hurricane Isaac.” As it turned out, the “hurricane” was no more than a brisk rainstorm for Tampa. Nonetheless, it succeeded in cutting Ron Paul out of his speech, and also gave the Republican National Committee hacks time to devise a plan that would deny Paul the floor nomination he had legitimately earned: In a last-minute rules change at the Convention, the RNC increased the number of primary/caucus victories required to secure a nomination from 5 to 8, thus eliminating Ron Paul and creating a false façade of “unanimous” support for Mitt Romney.

Now here’s where it gets really interesting. The Weather Channel, whose hurricane prediction helped solidify Romney’s coronation, has been co-owned since 2008 by Bain Capital, whose founding president and CEO had been . . . Mitt Romney.

Furthermore, in 2011 the Rothschilds had acquired a 70 percent interest in Weather Central, “the world’s leading provider of interactive weather graphics and data services for television, web, and mobile.”

In this clip, Evelyn de Rothschild discussed his weather venture:

Subsequently, the Weather Channel acquired Weather Central, placing forecasting under a virtual monopoly. Along with Bain, another of the Weather Channel’s three corporate owners is the shadowy Blackstone Group2, on whose International Advisory Board sits Evelyn’s powerful cousin Jacob Rothschild. Why are the PTB so interested in owning not only the weather but its forecasting? Well, besides ensuring that TV meteorologists won’t comment on chemtrails or geoengineering, it gives them aces up their sleeves in the relatively new weather derivatives market.

A general rule of investing is that, for everyone making money, there is conversely someone losing it. When you sell shares of a stock, it means someone else is buying those shares. If the stock then plummets, your decision to sell was fortunate, but unfortunate for the buyer. For those rigging markets, it has always been essential to have rubes who incorrectly buy or sell at strategic moments. Amateur investors, trying play the commodities game by relying on the long-term weather forecasts of controlled media, will guess wrong and get looted.

Despite all the advantages of modern technology, weather forecasting remains surprisingly inaccurate. Where I live, New England, on Thursday March 18 of this year (2016) the weather outlook for the weekend was sunny. On Friday, however, forecasters were suddenly predicting that Sunday would see a Northeaster that would drop a foot of snow. I distinctly remember one meteorologist saying, “Make no mistake, this storm will definitely hit us very hard, it’s just a matter of how much snow.” On Saturday morning, I tuned in to see how the storm would impact my weekend. To my delighted surprise, the embarrassed weather folk were eating crow: THERE WOULD BE NO SNOW AT ALL—just a dusting for the southern tip of New England.

That afternoon, my wife told me that her friends had just warned her about coming snow. “Oh,” I said, “your friends must not have heard the latest forecast.” But she insisted they had, so I turned on the TV again. Once more, the meteorologists recanted: now they again predicted a heavy snowstorm. The next day, around eight inches fell in my area.

Of course, I’m not a meteorologist, and I realize some storms can be tricky to predict, but over recent years, I have been stunned by the frequency with which weathermen have been quite wrong, even for relatively short-term forecasts. I suspect this is for at least two reasons: (1) HAARP rerouting weather from the normal patterns meteorologists expect; (2) skewed predictions from the weather platforms that high finance has bought control of.

Naturally, I don’t know how the Rothschilds allocate their market investments. But given their long history of fiscal manipulation, it would seem that weather control, combined with weather forecasting control, would make weather derivatives an irresistible item for any bankster’s portfolio.

Can an Election Be Geoengineered?

There is one other feature of weather control that was highlighted by the use of a faux hurricane to nullify Ron Paul at the 2012 GOP Convention. This wasn’t the first time Romney had benefited from an errant forecast. Concerning the 2012 primaries, I quote Jaret Glenn’s “How the Republican Party Stole the Nomination from Ron Paul”:

Maine: Ben Swann reported on shenanigans in Maine. Even though only 84% of votes had been counted; State GOP Chairman, Charlie Webster, declared Romney the winner over Paul by less than 200 votes. Hancock and Washington Counties hadn’t voted yet because Webster cancelled the caucuses due to an impending snowstorm, promising they could vote later and their votes would be counted. The snowstorm never occurred and he later reneged on his promise, telling voters in those counties their votes would not be counted after all. Washington County was Paul’s strongest in the state in 2008. Though other states with close outcomes held recounts, this was never a consideration for Maine.3

So neither the Tampa hurricane nor the Maine snowstorm materialized, and the beneficiary both times was Mitt Romney, whose Bain Capital co-owned the Weather Channel.

Besides all the other means of vote-rigging available, one can easily foresee how weather control could be a factor in helping elect Hillary Clinton, who, as I have elaborated elsewhere (under “The 2016 Race”), is the Establishment’s clear preference.

Let’s say that, in a given “swing” state, polls show Hillary favored in eastern counties, but Trump in western counties. On election day, harsh geoengineered weather—flooding, perhaps even tornadoes—could sweep the western counties, paralyzing the electorate, while the eastern counties would enjoy weather mild enough to permit easy travel to the polls. Such a scenario could win the state for Hillary, and her supporters could even crow that “God must love Hillary.”

In fact, as Tampa and Maine proved, no real weather disaster would be necessary; just a prediction of one by the Weather Channel (e.g., “tornado watch”) might suffice to keep many voters pinned at home. When you own the weather industry, winning can be a breeze.