Books are periodically sent to me, or recommended by readers—more, unfortunately, than I’ve been able to keep up with. I just finished one, however, that cried “book review”: 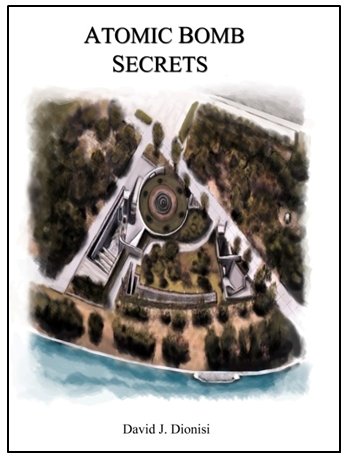 The U.S. government long claimed it dropped A-bombs on Hiroshima and Nagasaki because only this would convince Japan to end the Second World War, and that it “spared millions of lives” which allegedly would have been lost had America been forced to invade the islands.

I’ve known this was a lie ever since reading Dr. Anthony Kubek’s 1963 classic How the Far East Was Lost. Japan had, in fact, already offered to surrender on virtually the same terms we approved at war’s end.1 America demanded “unconditional surrender.” The Japanese were willing to accept this, but wanted to salvage one condition—to retain their emperor. Since we wound up granting that condition anyway, the dropping of A-bombs does not square with the public justification at all.

Establishment historians have tried offering an alternative explanation: President Harry Truman, aware of an impending cold war with Russia, wanted to demonstrate the A-bomb’s power in order to frighten Stalin.

However, this is equally bogus. In 1952, Major George Racey Jordan, a Lend-Lease expediter during the war, revealed that the Roosevelt-Truman administration had shipped the Soviet Union both the blueprints and materials for making the atomic bomb. This high-level treason, done on express orders from Harry Hopkins (White House front man for Zionist bankster Bernard Baruch), was detailed in Jordan’s book From Major Jordan’s Diaries. 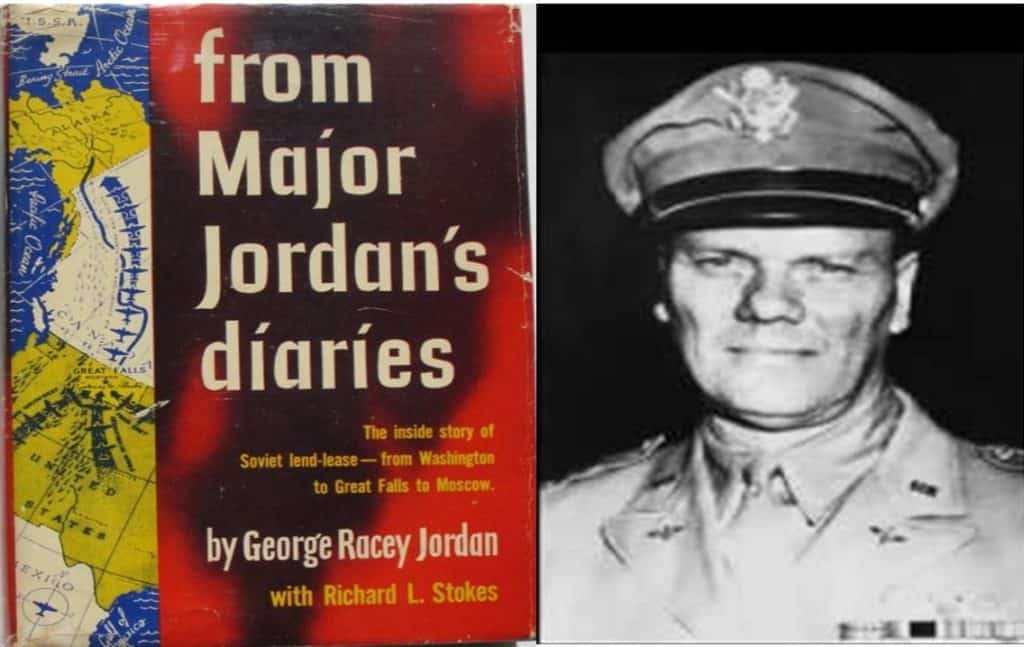 It made no sense that these people, who were gifting Stalin the A-bomb on a silver platter, would also try to “frighten” him with it. Establishment media’s image of Truman as “Cold War warrior” is myth. As documented in Kubek’s book noted above, the Truman State Department went into overdrive helping put Mao Tse-tung and the communists into power in China, so much so that even Capitol Hill Democrats condemned the President for it, including young Congressman John F. Kennedy.2 Truman did not send over 30,000 American soldiers to their deaths in the Korean War in order to “fight Communism,” but to validate the UN as a “peacekeeper” and to set a permanent precedent for by-passing Congress’s Constitutional authority to declare war. A 33rd degree Freemason who was the 33rd U.S. President, Truman also served Zionism with servility, recognizing Israel within minutes of its declaration of statehood, after AIPAC founder Abraham Feinberg gave him $2 million in a suitcase, discussed in another post on this site.

So why did Truman’s controllers order Japan’s nuclear bombing? As I have grown increasingly aware of the ruthless Talmudic psychopathology of the Powers that Be, I cynically confided to friends, “I think they enjoyed it.” But after discovering David Dionisi’s Atomic Bomb Secrets, we can be much more specific. This well-written, 217-page gem, documented with 496 end-notes, blows the lid off the sordid episode.

A ground-breaking detail I learned from Dionisi is the A-bomb’s role in Korea’s division into North and South. I’ve discussed the artificial justification for this division elsewhere, but Dionisi elaborates that Japanese scientists were developing their own atomic bomb. After initial research in Japan, the project was transferred to the Konan region of northern Korea (then a Japanese protectorate). This area was selected for multiple reasons: availability of uranium, the power the Chosin dams could generate, and (perhaps most importantly) keeping away from American bombers.

Giving the Soviet Union postwar control of North Korea (allegedly its reward for a mere five-days’ participation in the Pacific War) now makes far more sense. Not only was the cabal handing Stalin the plans and materials for the atomic bomb, they were giving him Japan’s installations for making one.

But Dionisi solves much more, especially the mystery of why Nagasaki was targeted.

After Christianity first reached Japan in the 16th century, it faced growing pains, including times of severe persecution, but gradually became established, centered in Nagasaki, which became nicknamed the “Japanese Vatican.” According to Dionisi’s research, in 1945 some 50,000 Nagasaki residents were Christians.

After the Enola Gay dropped the “Little Boy” bomb on Hiroshima on August 6, the plane named Bock’s Car (also written bockscar) carried the “Fat Man” bomb to Japan on August 9. Most of the 12-man crew believed their objective was Kokura, and a secondary target was only to be selected if weather interfered. Dionisi does much to debunk the “poor visibility” claim long used to justify the plane’s rerouting to Nagasaki.

The “Fat Man” bomb from Bock’s Car detonated directly over Urakami Cathedral, the largest cathedral in the entire Orient. At Nagasaki (250,000 residents), 73,844 were killed, 74,909 injured, and more than 120,000 suffered radiation effects.

Truman and other U.S. officials later claimed the target in Nagasaki was a military one: the Mitsubishi shipyard. But Bock’s Car flew three miles past the shipyard before dropping its payload. The cathedral was obliterated; the shipyard left virtually unscathed. Its famous hammerhead crane (below), built in 1909, still stands today. 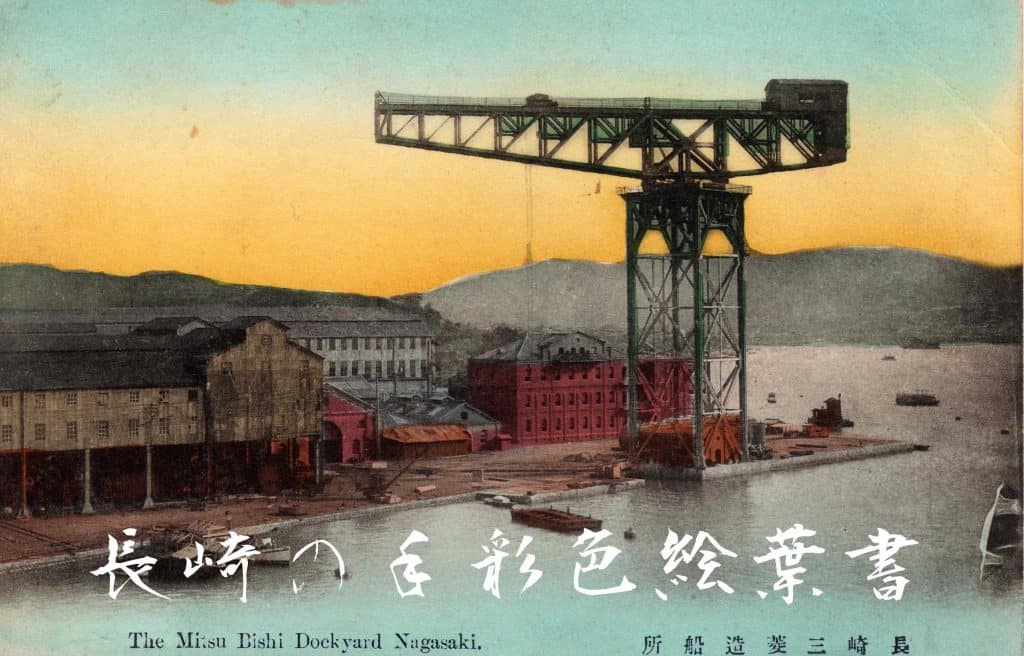 We shouldn’t overlook that Nagasaki expelled the Freemasons in 1926; by the 1930s Japan banned them entirely. Did this add “payback” to the Nagasaki bomb?

Dionisi insightfully notes: when Satanists conduct a human sacrifice, they believe they draw power from the victim’s death. At Nagasaki, over 70,000 lives, many of them Christians, were incinerated on a satanic altar.

(The Nagasaki bombing’s ritualism cogently reminds us that events like 9/11 are not necessarily purely geopolitical false flags, but often have spiritual dimensions as well. Is Nagasaki perhaps a clue as to why geo-engineered disasters keep striking America’s Bible Belt, but not the “Establishment” Northeast? Dionisi has written a book on 9/11, The Occult Religion of the 9/11 Attackers, which I haven’t read but have ordered.)

When people contemplate Japan’s nuclear bombing, most think: “Hiroshima.” Dionisi considers this a psychological ploy by the PTB (whom he calls “the Brotherhood of Death”). The first bombing would stand out in the public’s mind, while the principal target (Christian Nagasaki) would get largely overlooked.

In another macabre deception, a Catholic priest and Protestant minister were persuaded to bless Bock’s Car before it departed on its mission. Later, both men greatly regretted it.

Another compelling fact I learned from Dionisi: the horrifically bloody battle of Okinawa (over 150,000 casualties) was completely unnecessary to win the war; it was fought to convince Americans that A-bombs were needed.

But no one should think that, because they’ve read this review, they don’t need Dionisi’s book. It’s packed with other information I’d never heard before: about, e.g., Stalin, and Freemasonry. From his book you’ll learn why Pyongyang became capital of communist North Korea, why spying allegations were leveled against Dr. J. Robert Oppenheimer (the Manhattan Project’s scientific leader), and about the American POWs who died at Nagasaki. And be sure to read his end-notes. Unlike most end-notes, which are dull recitations of publisher names and dates, Dionisi’s are loaded with collateral information; they constitute a “book within a book.”

Update, September 10, 2016. Since posting this review yesterday, I have exchanged emails with Mr. Dionisi for the first time. I learned some details worth adding. When Japan surrendered, the emperor was compelled to tell the people he was not divine. The Nagasaki bombing ensured Christianity would not fill the spiritual void this announcement created. Also, when I wrote this review, and linked to Atomic Bomb Secrets on Amazon, I was surprised to find only two customer reviews there, because I recalled that several more had been there when I first purchased the book. Mr. Dionisi tells me there has been a long ongoing problem with his Amazon reviews being removed. I consider this a tribute to the book’s merit.

1. Anthony Kubek, How the Far East Was Lost: American Policy and the Creation of Communist China, 1941-1949 (Chicago: Henry Regnery Co., 1963), 91-92.
2. Kennedy remarked, “Mr. Speaker, over this weekend we have learned the extent of the disaster that has befallen China and the United States. The responsibility for the failure of our foreign policy in the Far East rests squarely with the White House and the Department of State. The continued insistence that aid would not be forthcoming, unless a coalition of government with the Communists were formed, was a crippling blow to the National Government. . . . This is the tragic story of China, whose freedom we once fought to preserve. What our young men had saved, our diplomats and our President have frittered away.” Comments made on January 25 and 30, 1949, as quoted in James MacGregor Burns, John Kennedy: A Political Profile (New York: Harcourt, Brace & World, 1961), 80.