The Unthinkable Has Finally Happened: Russia and America Have Traded Places 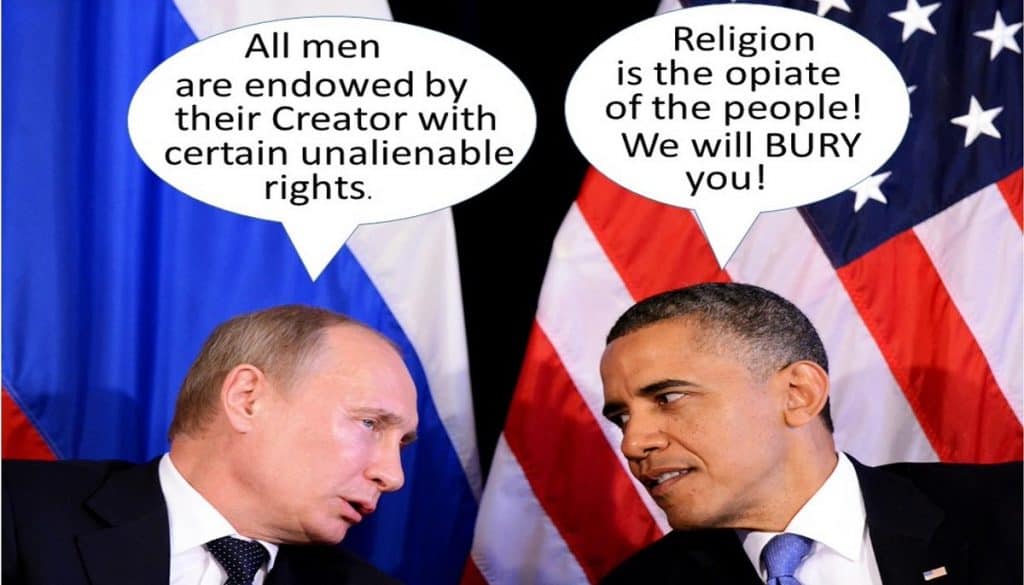 Note: This article is being published during the final month of Barack Obama’s administration; the impact of a Trump Presidency remains to be seen.

In 1985, I began my journalistic career writing for The New American magazine, house organ of The John Birch Society. (I am not a spokesperson for either entity, so my remarks here are my own.) The magazine was, and still is, a defender of the U.S. Constitution, an opponent of globalism, and a critic of the Federal Reserve and Council on Foreign Relations. In the pre-Internet era, it was one of those few journals to use the word “conspiracy” in connection with the U.S. government.

If anyone doubts this, check this 1983 clip of Georgia Congressman Lawrence McDonald, who had recently become the Birch Society’s chairman, as he fends off “conspiracy” ridicule by Tom Braden (CIA/CFR) on Crossfire, co-hosted by Pat Buchanan:

Dr. McDonald, of course, was lost later that year in the still-controversial Soviet shoot-down of Korean Airlines Flight 007.

Indeed, both the Birch Society and the magazine were perhaps best known as opponents of communism. During the Cold War, the Soviet Union and communism were correctly viewed as a police-state institutions birthed with the Bolshevik Revolution. They were the builders of gulags and the Berlin Wall, suppressors of freedom of speech and religion, the architects of Ukraine’s Holodomor, crushers of the 1956 Hungarian revolt. Even The Black Book of Communism, published by the very liberal Harvard University Press, put the number of people murdered by the communists at about 100 million worldwide1, although other sources put it much higher. And we perceived our America, with its Bill of Rights and middle-class prosperity, as the world’s beacon of freedom.

When Mikail Gorbachev came to power in 1985 and subsequently introduced glasnost, we at the magazine viewed it with due skepticism. To us, it was just another Soviet ruse, temporary liberalization intended to deceive the West into disarming. Indeed, that was precisely the view which KGB defector Anatoliy Golitsyn had expressed in his 1984 book New Lies for Old, which foretold communism’s future with astonishing accuracy—everything from the rise of a Gorbachev-like leader to the dismantling of the Berlin Wall. 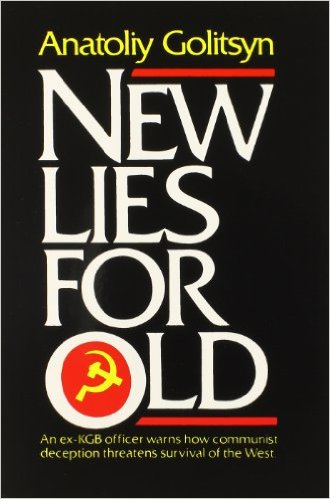 Giving further credence to Golitsyn’s work: its being totally disregarded by mainstream media (although his defection had inspired the opening scenes of Alfred Hitchcock’s 1969 film Topaz).

Golitsyn predicted that, in the end, communism would vigorously return, and that “all the totalitarian features familiar from the early stages of the Soviet revolution and the postwar Stalinist years in Eastern Europe might be expected to reappear.”2

For a long time, I awaited that rebirth of Russian communism. I initially viewed Vladimir Putin with strong suspicion. The persistent question on my mind has been: “Is he the real deal?” Many of us in alternative media have become cynical to the point of believing that no major world leader can ever emerge without being a lackey for the Rothschild-run New World Order.

Instead, a very different scenario has unfolded. It is the United States that is descending into communism (via creeping socialism), the police state (via the Patriot Act, NSA spying, etc.), and anti-Christianity, as nativity scenes are prohibited at Christmas, gay marriage and transgenderism carry the force of law, and the entertainment industry has gone full Lucifer.

Over five years ago, the popular YouTuber Brother Nathanael, a Jewish convert to Orthodox Christianity, summarized the distinctions between Obama and Putin, and the different paths their nations were taking:

Unlike so many U.S. officials who, indoctrinated by the Council on Foreign Relations, place global interests above America’s, Putin is a nationalist who looks out for his own citizens. While America continually adds trillions to its staggering debt, Putin has actively worked to eliminate debt; he paid off all his country owed to the IMF and Rothschild creditors from the Yeltsin years.3 Putin has signed into law a ban on ads for abortions, while calls for ending abortion altogether in Russia grow. Whereas Russia has prohibited genetically modified foods (GMOs), the United States even outlaws GMO labeling requirements, preventing our people from knowing what they’re eating. Among the Russian people, Putin enjoys unsurpassed popularity.

Putin also makes refreshing sense in his foreign policy. Since the Zionist-perpetrated 9/11, America has become the world’s bully, destabilizing nation after nation in the Middle East, in wars that were already planned in 2001, for the sake of creating the Luciferian Greater Israel. Those wars have in turn sent millions of refugees into Europe, ensnarling that continent in chaos. After the brutal deaths of Saddam Hussein and Muammar Gaddafi, the Zionists next envisioned Bashar al-Assad’s bloody body being dragged through the streets of Damascus, and so the U.S.-created ISIS forces struck Syria. (Incredibly, a number of Americans remain so brainwashed that they still think these wars are all about “freedom and democracy,” a slogan that should have been relegated to oblivion after Woodrow Wilson said fighting World War I would make the world “safe for democracy.”)

But Putin had seen enough Middle East madness, and put a halt to it, climaxed by the recent victory of the Syrian army in Aleppo.

Perhaps most important is the spiritual dimension, which is the root of the Russian transformation under Putin. I again turn to Brother Nathanael:

Putin’s faith is not new. Father Tikhon Shevkunov, a Russian Orthodox monk very close to him, said in 2001 that Putin “really is an Orthodox Christian, and not just nominally, but a person who makes confession, takes communion and understands his responsibility before God for the high service entrusted to him and for his immortal soul.”4

In this two-minute clip, Putin criticizes Western countries for abandoning their own Christian roots and moral values, banishing Christian holidays, and embracing political correctness, pedophilia, and globalism. How I wish to see an American President speak like this:

Since the Soviet Union broke up in 1991, over 26,000 new churches have opened in Russia.5 Public schools have become so Christian that some parents have complained about it. In November 2016, accompanied by Patriarch Kirill, Putin dedicated a statue of Vladimir the Great, who Christianized Russia in 988 AD:

For those who still harbor doubts about the authenticity of Putin’s faith or the Russian revival, and have time for a 14-minute video, I recommend watching this:

Incredibly, at an evangelical church I used to attend, which was mentally incarcerated by Christian Zionism, the Bible teacher told us that today’s Russia is the evil Gog and Magog mentioned in the Bible, and confided to us his belief that Putin is the Antichrist. This individual was so bottled up in Hal Lindsey’s warped theology and the Left Behind series, that he was blinded to the obvious truths occurring in our world. While Obama was lighting up the White House in rainbow colors to celebrate gay marriage, this Bible teacher continued to proclaim how America is a “Christian nation” standing against “evil” Russia.

Many American Christians pray that the world will experience a spiritual revival. What most of them don’t know: revival is occurring now, within Russia.

As a veteran anti-communist from the late Cold War era, and bitter critic of the USSR, I never dreamed I’d see the day that America and Russia traded places. But it has progressively happened. Is Vladimir Putin the real deal? I believe he is. The corporate media’s continual demonizing of him (most recently with totally unproven claims that he hacked the 2016 election) greatly supports that. Some will say that Putin is only acting; if so, I say give us more such actors.

The spirit of the czar and of Christ, which the Rothschild-backed Zionists thought they had forever destroyed in Russia, is rising from the ashes.