How Many Misrepresentations Can Fit into One Sentence?

Two days ago, a Tweet directed my attention to an online article called “The 9/11 Problem” by Adam Fitzgerald, dated July 6. It’s a sweeping assault on the 9/11 Truth community, bashing everyone from David Ray Griffin to Christopher Bollyn to Pilots for 9/11 Truth.

While it’s certainly correct to say that 9/11 Truth has been hampered by mistakes and infighting, if not some outright infiltration, Mr. Fitzgerald goes for broke, listing numerous well-known 9/11 Truthers and groups, denouncing them as (samples): “mentally unstable,” “rabid,” “nonsensical,” “clown car in a circus,” “the obvious fraud he is,” “jaw dropping absurdity,” “fanatical ideas,” “ridiculous fool,” “laughable” (used three times in one paragraph), “unimaginable tripe,” “full of the rankest, foul smelling human fecal excrement,” “at times borderlines on complete idiocy,” “unsound, idiotic ideas,” “liars and charlatans,” “a man with absolutely zero morals,” etc. Fitzgerald evidently believes that name-calling is an awesome tool for communicating one’s own 9/11 beliefs; I doubt that he’ll be writing a book anytime soon called Feel the Love: How to Win Friends and Influence People in the 9/11 Movement.

Early in his post, he paints me as one of his villains:

“James Perloff, an orthodox Christian, began making videos that were outlandishly comedic, suggesting anything from a full blown Jewish/Neocon/Catholic conspiracy to no planes ever being hijacked at all.” 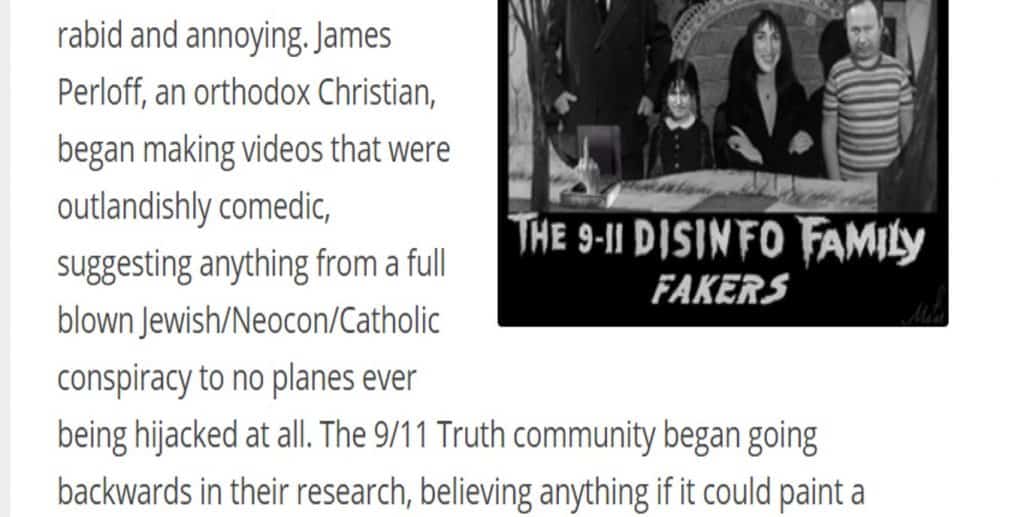 Since Fitzgerald prides himself so strongly on ACCURACY (and on pointing out the faults of others in this regard), let’s examine the inaccuracies he managed to pack into this one sentence. My intention here is not to make a mountain out of a molehill, but to expose the mountain in the molehill.

First of all, I am an Orthodox Christian, but why did he feel it important to preface his sentence by designating my faith? More on that momentarily.

Next he says that I “began making videos.” Correction: I do not “make” videos. I’ve never tried. I’ve never had a YouTube channel or been hosted on other video platforms. I’m an author/blogger. It’s true that I wrote the script for Free Mind Films’ documentary ShadowRing (unrelated to 9/11), and podcast hosts have interviewed me on many topics; some of these have been audio only, some video.

But that’s different from “making videos.” I realize this may seem like a nuance, a mere point of semantics; but Fitzgerald’s language is misleading—and he himself asserts that we must be sticklers for accuracy if the cause of 9/11 Truth is to be upheld.

But let’s get to his main claims: that regarding 9/11, I advocate “a full blown Jewish/Neocon/Catholic conspiracy” and “no planes ever being hijacked at all.”

First, I have never, in any post, interview, or even in an email, remotely hinted that 9/11 had anything to do with Catholics (or the Vatican or Jesuits). I challenge Mr. Fitzgerald to produce a single video clip, or excerpt I’ve written, that supports his contention. Of course he can’t, and never will.

So where did he dredge up his bizarre accusation that I say 9/11 was a “Catholic” conspiracy? Straight from nowhere. Mr. Fitzgerald either deliberately lied or suffers from delusional memory. Yet he, as self-appointed Grand Inquisitor of all 9/11 Truthers, relentlessly condemns others for errors, lies, and distortions.

In addition to 9/11 being a “Catholic” conspiracy, he claims I say it was a “Jewish” conspiracy (kind of a weird combo). This is false. My 2013 book Truth Is a Lonely Warrior has a lengthy chapter on 9/11. Anyone who searches that chapter will find that the words “Jew,” “Jews” or “Jewish” do not appear in that chapter, not once.

Now it is true that I have tied 9/11 to Israel, especially its intelligence services. Here’s a Wikispooks post which supports that, and some may be interested in hearing the words of Dr. Alan Sabrosky, who was Director of Studies at the U.S. Army War College for more than five years:

Citing links between 9/11 and Mossad/Israel is not the same thing as saying “9/11 was a Jewish conspiracy.” The distinction is obvious. By the way, I’m half-Jewish myself; the Perloff family (originally Perlovsky) were Jews who immigrated to America from Russia in 1904.

Mr. Fitzgerald also accuses me of believing that 9/11 was partly a “neocon” conspiracy. To this one charge I’ll plead guilty. I’m sure most of my readers are already familiar with the Project for a New American Century (PNAC) and its paper Rebuilding America’s Defenses which, one year before 9/11, famously said “the process of transformation, even if it brings revolutionary change, is likely to be a long one, absent some catastrophic and catalyzing event—like a new Pearl Harbor.” Many neocons, who had already advocated aggressive military interventionism in the Middle East, found their way into the Bush administration during the months preceding 9/11. But since I’m apparently a reckless conspiracy nut for simply noticing this, I’ll quote that tin-foil wacko Pat Buchanan, in a syndicated column he wrote:

In 1996, in a strategy paper crafted for Israel’s Benjamin Netanyahu, Richard Perle, Douglas Feith and David Wurmser urged him to “focus on removing Saddam Hussein from power” as an “Israeli strategic objective.” Perle, Feith, Wurmser were all on Bush’s foreign policy team on 9-11. In 1998, eight members of Bush’s future team, including Perle, Wolfowitz and Rumsfeld, wrote President Clinton urging upon him a strategy that “should aim, above all, at the removal of Saddam Hussein.” On Jan. 1, 2001, nine months before 9-11, Wurmser called for U.S.-Israeli attacks “to broaden the [Middle East] conflict to strike fatally . . . the regimes of Damascus, Baghdad, Tripoli, Teheran and Gaza . . . to establish the recognition that fighting with either the United States or Israel is suicidal.” “Crises can be opportunities,” added Wurmser. On Sept. 11, opportunity struck.

No, I don’t think it’s just a coincidence that after 9/11, America launched endless Middle East wars which, according to General Wesley Clark, were already foreseen in the Pentagon in 2001. No, I don’t believe in Saddam’s “Weapons of Mass Destruction” or Assad’s “chemical weapons attacks,” any more than I believe in the long-discredited “incubator babies” story. And I absolutely condemn the squandering of trillions of dollars and the needless taking of hundreds of thousands of lives. So, yes, I plead “guilty” to believing in, and opposing, a neocon conspiracy.

Lastly, Mr. Fitzgerald’s sentence asserts that I believe in “no planes ever being hijacked at all.” Ironically, last year (2017) I published two posts saying the exact opposite of what Fitzgerald claims I say: 9/11 Simplified and the follow-up Conversations with an Airline Pilot about 9/11. The subtitle of the first began with these words: “Yes, Virginia, there really were hijackers on the 9/11 planes”—so it’s pretty hard to miss. In these posts, I expressly disagreed with “no hijackers on board,” “electronic hijacking,” and “fake phone calls.” I said the same thing in my follow-up interviews. So Mr. Fitzgerald made his claim without even bothering to look or listen.

However, I did propose an alternative theory: that the hijackers may have been Israeli special ops posing as Arabs, something that has long been an MO of Israeli false-flag operations (King David Hotel bombing; Lavon Affair; attacking the USS Liberty in unmarked planes; La Belle Disco affair as described by former Mossad officer Victor Ostrovsky). And as I stated in the opening paragraph of “9/11 Simplified”:

“This post is not intended to be taken dogmatically; I do not insist that its conclusions are correct; they are just presented for consideration.”

Later in his article, Fitzgerald calls me a “complete, laughable no-plamer.” (Sic; I’m sure he’ll correct that typo; we all make them.) Evidently Mr. Fitzgerald (forgivably) did not read my post from last month, “What Struck the Twin Towers: Revising My Outlook.” It’s true that for some time I entertained the possibility that cloaked missiles hit the 9/11 targets (due to the difficulties of three jetliners being controlled with bullseye accuracy at low altitude and velocities greatly exceeding their design limits, the alleged pilots’ doubtful skills, questions about the ability of aluminum planes to penetrate steel structures, etc.). But in my last post I conceded that planes, most likely modified drones, had been employed. And I included this disclaimer:

“As always, what I present should be understood as a suggestion for consideration, not something I dogmatically insist on as fact. I remain open to further revising any views.”

I underscored this outlook in my short 2018 post “12 Angry Men” and the Truth Movement. One of that article’s main messages was the importance of being willing to change one’s views when pursuing truth.

Which brings me to a crucial point about 9/11 Truth, and truth in general.

In any search for truth, a person is going to make mistakes. In fact, if you don’t make mistakes, you’re probably not trying very hard.

Let’s take a famous example: Thomas Edison. (I am not comparing myself to that gentleman.) It’s classically often said that in his quest to develop the light bulb, he got it wrong about 1,000 times. Does that mean that each time Edison failed, he was a “clown,” “fraud,” “laughable,” etc.? Does it mean he was discrediting science whenever he got it wrong? Well, some scoffers might have said so before he succeeded. But no, it just means he was on the hard road of searching for the right answers.

Now some may object that Edison wasn’t dealing with a criminal investigation, so let’s take one: the Lindbergh kidnapping. A few years ago, the FBI released its files on that case. The FBI, as well as other law enforcement agencies, followed scores and scores of leads and theories that proved false. Does this mean the FBI agents and police were fools for chasing down false leads and theories? No. When one lead proved a dead end, they pushed on to the next. As with Edison, the hard road to truth, as it is so often, was paved with multiple mistakes.

Unfortunately, Mr. Fitzgerald seems to think that if anyone in the 9/11 Truth movement pursues an incorrect theory, or simply makes errors, this makes them a “fraud,” “charlatan,” “liar,” etc. He even says “we as a whole human community should convene and subject these obvious frauds and expel them into the dark shadows where they belong.” (Or as Stalin would have put it, “Ship them to the gulag.”) But as I have already demonstrated, Mr. Fitzgerald himself—in his description of me—committed several errors in the vast expanse of one sentence. Which brings me back to the opening phrase of his condemnation:

Is a person’s personal faith relevant to truth, especially when discussing non-religious matters? Most people wouldn’t think so, but evidently Fitzgerald does; otherwise there was no reason to bring it up. Did he perhaps hope that by denigrating me, he would also denigrate Orthodox Christianity? Two birds with one stone?

Mr. Fitzgerald would be surprised to know that many of us in alternative media are quite open to revising our views about 9/11; I have repeatedly done so, as can be proven by reading Truth Is a Lonely Warrior’s chapter on 9/11, and comparing how my perspective has since changed, or even within this blog, which was established in 2014.

By the way, I think that in his post, Mr. Fitzgerald makes some valid observations about 9/11 itself, including some issues I recently began investigating. But he’d get a lot more people on board his ship by speaking softly instead of swinging a big stick.

99.7% VACCINATED CITY OF WATERFORD NOW HAS HIGHEST RATE OF COVID INFECTION IN IRELAND